The following tables tell you the approximate distances required to reach the Salzburg Precautionary Limit of 2001 and 2002. The purpose of the calculations below is to demonstrate that the inverse square law (defined at right) is not as helpful as you may think, when the level at which health effects occur is far below the transmit power of the devices (and international standards).

After performing the calculations, one realizes that having a cordless phone station using DECT non-stop radiation, or a Wi-Fi router in the same room provides similar (or greater) power densities to living near a cell tower. Sleeping with an alarm clock within one foot of your head is like having one's personal electricity tower. There are studies showing that both cell towers (e.g., see studies by Robert Santini) and cordless phones (e.g., see studies by Leonnart Hardell) can be a potential health risk. Effects have been reported at very low levels.

Below, find the comparisons between:

Note that the measurements below assume radiation in direct line of sight. Wood and dry wall do very little to block wireless signals. Windows with low-E coating or low-E films, concrete, and brick, may provide higher levels of attenuation, and are not factored into the calculations below 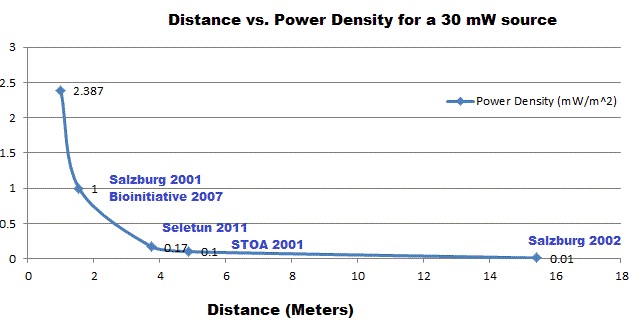 Method of Calculation: We can approximate the average power density using the equation P*G/4Πr2, where 4Πr2 is the surface area of a sphere and G is the antenna gain. For approximate purposes, the numbers calculated below assume an isotropic antenna with uniform intensity.

**Note that directional antennae are not factored in here, which could underestimate the power in certain directions and overestimate the power in other directions. For directional antennae, we must factor in gain to calculate the maximum required distance. The distances in this section may need to be additionally adjusted by multiplying the distances by the square root of the gain. This multiplication factor might vary anywhere from 1.3 to 7, depending upon the antenna's gain.

The following presentation by Graham Philips shows that a Wi-Fi enabled laptop at 50 cm can provide more radiation than a mobile phone mast (cell tower) at 100 meters (See slide 13).

The following table shows the minimal distances required to satisfy the Salzburg 2001 Limit and 2002 Outdoor Limit based upon the assumption of an isotropic antenna. According to the Table of Effects mentioned above, some effects are still seen at the Salzburg(2001) limit. Hence, the Salzburg (2002) limit is preferrable, or somewhere in between. To calculate these numbers yourself given the transmit power of a wireless product, refer to the Formulas page.

These are only general guidelines. Different wireless routers will vary in strength. Some wireless routers allow you to reduce the transmitting power, and even schedule the hours during which Wi-Fi will be turned on.

Method of Calculation: The power density is estimated using the equation P*G/4Πr2, where G is the gain from the directional antenna (4 dBi translates to 10^(4/10)=2.5) and 4Πr2 is the surface area of a sphere.

See an actual smart meter measurement from Stop Smart Meters!. Note that the meter used in this video uses μW/cm2. To convert from μW/cm2to mW/m2, multiply by 10. Thus, 8 to 40 μW/cm2 converts to 80 to 400 mW/m2. For more information on smart meters, see What is a Smart Meter?.

Method of Calculation: The power density can be estimated using the equation P*G/4Πr2, where G is the gain from the directional antenna and 4Πr2 is the surface area of a sphere. In practice, the cell tower radiation is not usually isotropic but is directional with main lobe and side lobes. Note that a directional antenna focuses the power in certain directions, resulting in higher required distances. If we assume a directional antenna with gain of 17 dB = 50, then the distances required in certain directions could require a multiplication factor of sqrt(50)=7. For more information, see Report on Cell Tower Radiation submitted to Secretary, DOT, Delhi, Prepared by Prof. Girish Kumar, IIT.

Note: Many surveys find cancer or other health effects within 300-400 meters.

Note: Vatican radio tower study found cancer risk within a 5.5 mile radius = 8.85 km. The radio tower is said to include a 500 kW transmitter for the Far East and Latin America.

Method of Calculation: We can approximate the power density using the equation P*G/4Πr2, where 4Πr2 is the surface area of a sphere and G is the antenna gain. Below we will assume an omnidirectional isotropic antenna with G=1.

Note that power line (AC) magnetic fields drop much more quickly down to levels thought to be safe.

These approximations are taken from "Buying an "EMF Safe" Property - 2. Powerlines and pylons" from Powerwatch UK and the PowerWatch Handbook, p.43. However, it is stressed that one should measure the magnetic field to be sure. Even in the absence of power lines, there are other factors that can also influence the power line magnetic field.

Furthermore, note that ideally, the target level should be < 1 mG, with an even stricter guideline of < 0.2 mG for sleeping quarters. See the Power line Fact Sheet and the SBM 2008 standard for power lines which recommend levels < 1 mG.

We shield Buildings / Spaces from Radiations

We shield Buildings / Spaces and we detect Electromagnetic Fields that put areas, settlements and buildings due to the existence of Antenna Parks in the area ...

Get informed - talk to us today regarding any radiation issues! 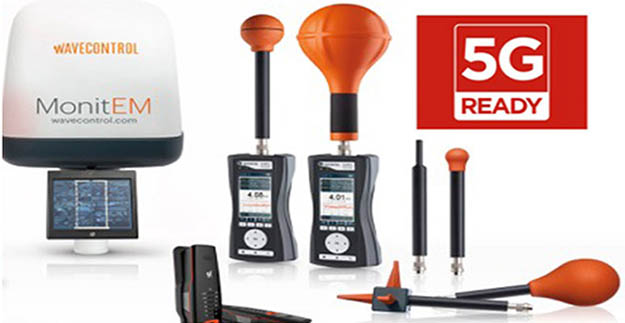