Radon is found in all buildings and in nature. High concentrations of radon (a natural radioactive gas) pose a notable health risk

MEASUREMENTS OF THE RADIOACTIVE RADON GAS

Radon is a natural radioactive gas which is colorless, odorless, tasteless and inert resulting from the decay of radium, a subsidiary of uranium. Due to its presence in the soil, rocks and water, as well as in the building materials derived from them, radon is found in all buildings. High concentrations of radon pose a significant health risk.

The measurement recommended by Aktinovolia.com provides accurate results for the collection of radon indoors. Reducing the concentration of radon is possible and can be done with simple techniques.

See the following information about Radioactive Radon and contact us for measurements:

The problem has been known abroad for many decades. In our country very recently began to occupy more intensively specialists. In many US states it is mandatory to measure radon before issuing a building permit! The Czech Republic has a state network of 300.000 radon meters! About 50.000 people die every year on our planet from cancer due to radon! According to the University research, 12 locations in Greece far exceed the safety limits and 25 the danger limits! 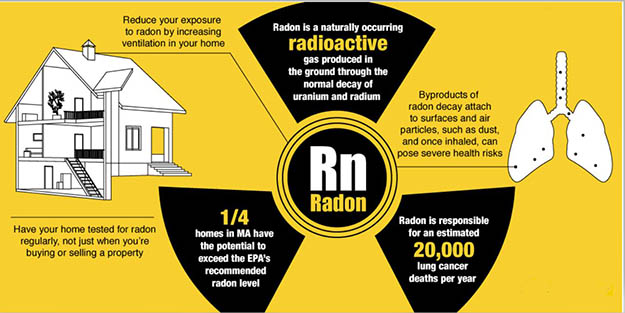 In our country, very recently, it started to concern us. From the Greek side, little has been done, both to identify problem areas and to address it.

The six (6) natural noble gases are the following:

What is radon? All people in their daily lives are exposed to environmental radiation. Environmental radiation is the dose of radiation that each of us receives in normal daily life. Sources of natural radiation include terrestrial sources (radiation from the decay of natural radioisotopes in rocks and soil), cosmic radiation, medical sources. strong (X-ray) products of nuclear tests or accidents at nuclear power plants and other atmospheric sources . The representative average annual dose of ambient radiation received by each individual per year is 106 mrem (and this does not include radon).

Today, it is widely accepted that human exposure to high levels of environmental radiation has adverse effects on health, without a precise safety margin being determined. Environmental radiation also includes that of the radon element. Radon 222 is a radioactive noble gas that releases fluorine and uranium during the process of natural decomposition of elements, which are common and naturally occurring elements in varying amounts in rocks and soil.

Odorless, invisible and tasteless, as radon is, it cannot be detected by the human senses.

Radon 222 decays into radioactive elements, two of which polonium 218 and polonium 214 , emit alpha particles >, which are extremely effective in damaging lung tissues. These emitted alpha particles, derivatives of radon cleavage, are involved in causing lung cancer in humans.

Radon in the building space: outside air, where it is diluted in low concentrations, radon poses a significantly lower risk than indoor air. In the indoor air environment, of course, radon accumulates at significant levels. The size of the radon concentration in these areas is primarily due to the construction of the buildings and also to the amount of radon in the underlying soil. Radon is produced in the soil that came from the decay - erosion of celestial rocks. As a ground gas, radon diffuses naturally through cracks and openings in permeable soils. Once it enters the atmosphere, it dilutes and disperses. Its concentration in ambient air is therefore quite low .

The composition of the soil under and around a house affects the levels of radon and the ease with which it migrates to the interior of the house. Normal differences in air pressure between the house and the ground can create an imperceptible crack in the house, which in turn can draw radon gas from the ground into the building. Radon can enter the house from the ground through cracks in the floors and concrete elements, through floor drains through drainage well pumps, through construction joints and tiny cracks or pores in the walls. Radon levels are generally higher in the bases of houses and in the ground floor rooms , which are in contact with the ground.

Because radon is very heavy (it is the densest known gas) it tends to accumulate at the bases of buildings. From the moment it enters the building, radon decays radioactively. Some of its subsidiaries are also radioactive and emit radiation as they decompose. Some of them also adhere to dust particles and thus are concentrated in the lower levels of buildings.

The real problem arises when the air is contaminated with radon or one of its subsidiary products is inhaled. Radioactive decay of radon releases alpha particles, which are particularly harmful to biological tissues. Direct doses of alpha radiation inside the lungs are thought to cause more deaths from lung cancer than any other cause other than smoking. Factors such as the design, construction and ventilation of the house affect the diodes and sources that can "attract" radon inside the house.

Radon control strategies involve changing the following three factors:
- the size and direction of the pressure differences between the interiors.
- the operating rate of the ventilation system.
- the amount of outside air entering the house.

First of all, of course, they are necessary:
- the control of the house for the existence of radon. This is easy and quite economical.
- repair the house, if the radon level in it is more than 4 picocuries per liter (& gt; 4pCi / L)
- reduction of radon levels less than & lt; 4pCi / L because they also carry some risk.

Radon is thought to be responsible for thousands of cancer deaths each year in the United States. Thus, the NRA advises to check all the houses below the third floor for radon.

When buying or selling a home, it is imperative that the radon test be preceded by a trained, qualified and state-authorized contractor who will perform it.

Methods for reducing radon in homes.
An effective program to reduce or reduce the risk of radon in homes focuses on the following key strategies:
1. Radon entry points into homes must be located and sealed.
2. The ventilation of the house can be improved by keeping more windows open or the operation of fans.
3. construction methods that allow the installation of a ventilation system. Probably the simplest method of reducing radon is to increase the ventilation of the house, (sometimes this is enough to solve the problem).
4. selection of non-radioactive construction materials.
5. Insulating cracks in buildings can also reduce radon entry especially when done in special places where radon enters the house.

A variety of construction solutions are available to homeowners and include, among other things, ventilation systems in the foundation of the house.

New homes can be built with features that prevent radon from entering and allow radon problems to be addressed, which could occur in the future.

These cost less if installed during construction of the house than in an existing home. These interventions keep radon values ​​below 2pCi / L.

The cost of radon reduction repairs depends on how the house is built and other factors. 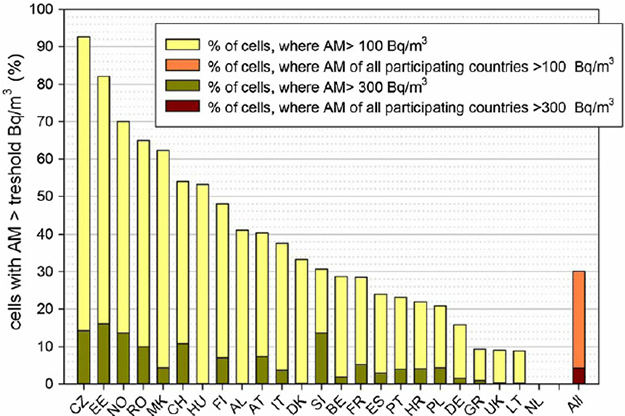 Percentage of cells with AM radon concentration of . 100 and 300 Bq m 2 3 per country and for all participating countries.

Constructional ways to avoid radon in your space:

There are basically two ways to avoid radon in construction:

- the ventilated foundation and
- the use of special sealing membranes

These essentially mean, the creation of a second floor above the basement floor (with an intermediate gap) or the placement of special plastic pieces, igloo type, that help collect pollutants and lead them out of the building (ventilated floors).

What is Radon Gas?

Map with the Radon concentrations in Greece

The danger of Radon Gas

Radon : The invisible threat in our home! 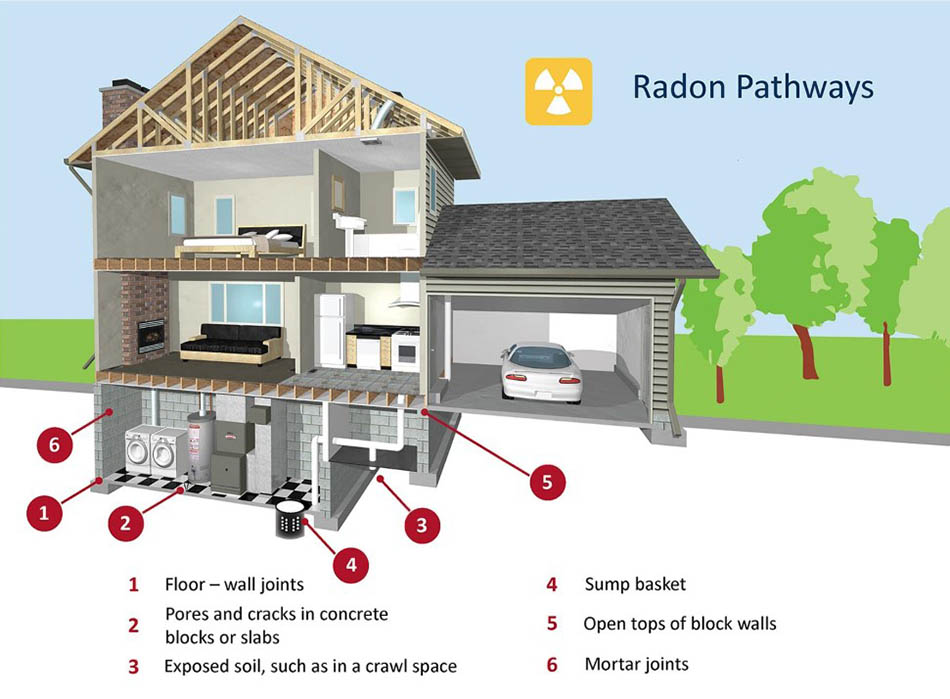