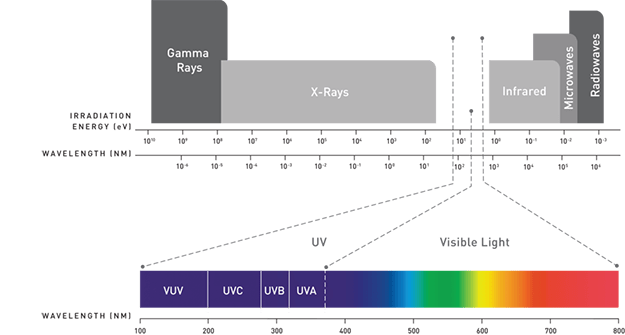 There are three types of UV radiation

UV-A: This radiation ranges between 315 and 400 nanometers. It is the safest species.

Type A (UVA) ultraviolet radiation having a wavelength of 400-320 nanometers (nm). UVA is the largest source of sunlight on the earth's surface and penetrates well beneath the surface layers of the skin. The outer layers of the skin receive 18 times more energy from UVA than from UVB. 48% of the annual UVA dose is taken in summer and 52% in the rest of the year. UVA (unlike UVB), is not filtered by window glass and is relatively unaffected by altitude and atmospheric conditions

UV-B: This radiation in the vacuum ranges between 280 and 315 nm. It causes tanning, but it can be dangerous.

Type B (UVB) ultraviolet radiation. UVB (320 - 290 nm) reaches smaller amounts in the earth's surface due to the absorption of much of it by the ozone layer. But again, it is enough to cause damage. 72% of the annual UVB dose is taken in summer and 28% is taken during the rest of the year. UVB causes more damage to the outer parts of the eye (ie the cornea and the lens) because they infiltrate it to protect the inside of the eye. It also causes damage to the eyelids as well as burns to the skin (UVA does not cause burns). 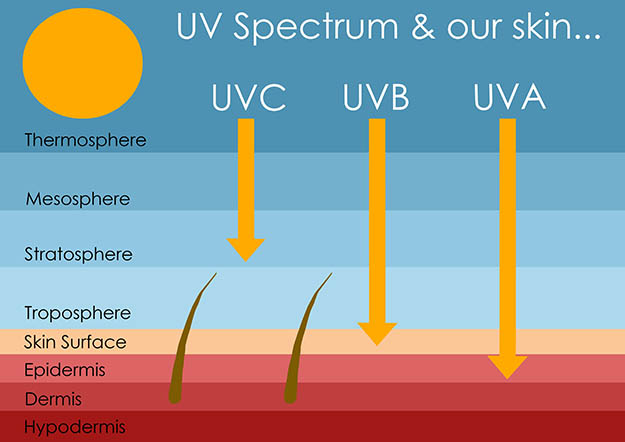 UV-C: This radiation in the vacuum ranges between 40 nm and 280 nm. It is the most dangerous type of ultraviolet radiation, as it has been used in laboratory mutations.

Type C (UVC) ultraviolet radiation. UVC (290 - 200 nm) is extremely harmful to the skin, but is completely absorbed by stratospheric ozone and does not reach the earth's surface.

The main source of ultraviolet radiation is the sun
It reaches the earth through its re-emission from the stratosphere. It is dangerous radiation and the ozone layer protects the earth's surface from it.
This is why the ozone hole is a serious ecological problem.

When ultraviolet radiation interacts with DNA it causes a rearrangement where there are two contiguous thymine bases creating thymine dimers.
The shape of the DNA changes locally at the point where the dimers are formed, causing the polymerases of both DNA and RNA to pass through them, thus changing the reading frame, resulting in mutations.
Organisms have developed several different mechanisms to repair thymine dimers, such as the enzyme photolase that is activated by blue radiation and separates dimers. Other mechanisms cleave the site where the dimers are formed and DNA polymerase fills in the missing bases.
The ability of the human body to protect and repair the damage caused by ultraviolet radiation decreases during our lifetime. Some people experience photosensitivity reactions to exposure to UV radiation (photosensitivity) due to genetic-metabolic peculiarities or drug use. In general, the shorter the wavelength, the greater the risks of exposure to UV radiation. 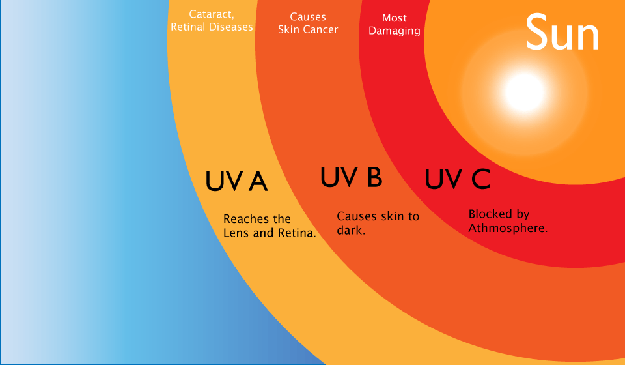 Sunlight and eyes
Ultraviolet radiation reaches your eyes mainly through reflection on surfaces such as asphalt, sand, water, glass and snow (skiers who are temporarily "blinded" (for 24-48 hours) if left without their glasses in the snow, they actually get photokeratitis , an inflammation of the superficial cornea of ​​the eye that is proportional to the skin burn).
Inside the eye, the lens and cornea filter UV radiation, but over time this infiltration causes damage to the eyes. This is especially true for the lens, which after years of UV absorption acquires a yellowish color and blurs (this is the waterfall ).
The lens is the structure of the eye that focuses light to reach specific locations in the retina - the lining at the back of the eye that contains the stimulus receptor cells. With this focus, part of the UV radiation reaches the back of the eye, where it can also cause damage.

Acute exposure results in burns to the eyelids, photokeratitis (inflammation of the cornea, and photoconjunctivitis - inflammation of the cornea).
Chronic UV exposure can cause flaps (the appearance of a cancerous growth starting in the inner corner of the eye), cataracts, macular degeneration, and even cancer of the skin around the eyes, eyelids or inside eye.
For injuries from acute exposure even a noon on the beach without sunglasses and a hat is enough to suffer e.g. a sensitive man burn in the cornea, which he will probably notice at night, after returning home and going to bed at night, when he wakes up with severe eye pain.
Long-term damage, on the other hand, does not occur overnight, but accumulates over time acting cumulatively. This means that each time the eyes are exposed to UV rays without protection, new lesions are added to the previous ones.

Who is most at risk
High risk groups for both acute and chronic exposure include those with light skin and light eyes, infants, toddlers and young children, as well as patients with cataract eye surgery who have undergone photodynamic therapy. for macular degeneration and those taking photosensitivity drugs (such as certain antibiotics and contraceptives).
Also, those who work outdoors at noon (farmers, fishermen, builders, etc.), those who work in places with artificial UV sources and special population groups, such as water and winter sports enthusiasts (quite often 20-year-olds) surfing show fin). 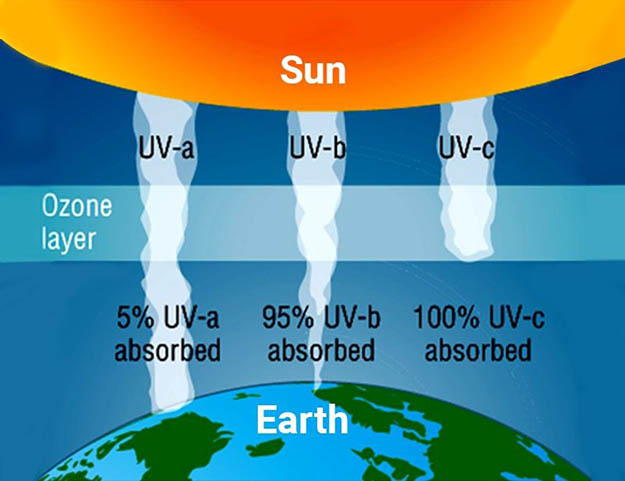 Ultraviolet banks emit UV-B radiation (312nm) which is dangerous for the skin and eyes. Proper use requires the acrylic cap of the device to be closed when observing the gel, to wear an apron (the radiation does not penetrate the clothes), gloves and goggles.

The laminar flow chamber has a germicidal lamp that emits UV-C (253.7nm). The use of the lamp in order to sterilize the working space of the booth is done for 5-10 minutes and after notifying the colleagues not to be around. After sterilization the room should be ventilated because UV-C radiation produces ozone.

The following equipment must be used when working with UV sources. 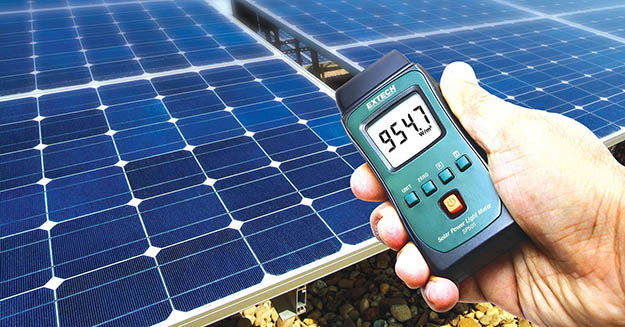 For the Low frequencies, measurements of your space are estimated in points

For further knowledge about UV exposure for the Sun for the best information and sensitivity of the Hotel for its clientele.

2) Prepare a study that includes at least the following:

b) An additional map (excluding absolute values) will be provided with a color code identifying areas that exceed the permissible limits, as shown by National and European health recommendations for office space or storage areas for sensitive material.

3) The study should include proposals with tables of exceedances, at the points to be identified.

The study will be prepared and signed by 4 scientists at least 2 from the team LAZER of the University of Crete. A mathematician from computer science and an environmental physicist.

Protect yourself from solar radiation

The effects of solar radiation on our eyes and vision

Solar radiation: See in detail all its effects on our skin

Get more info - contact us today regarding any radiation issues! 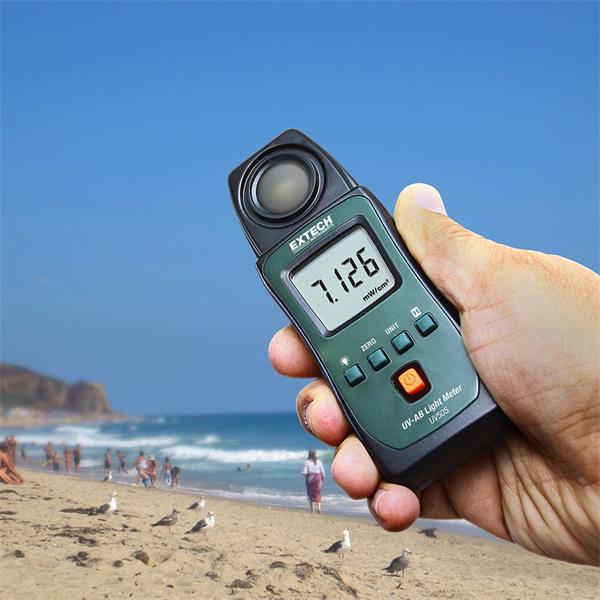 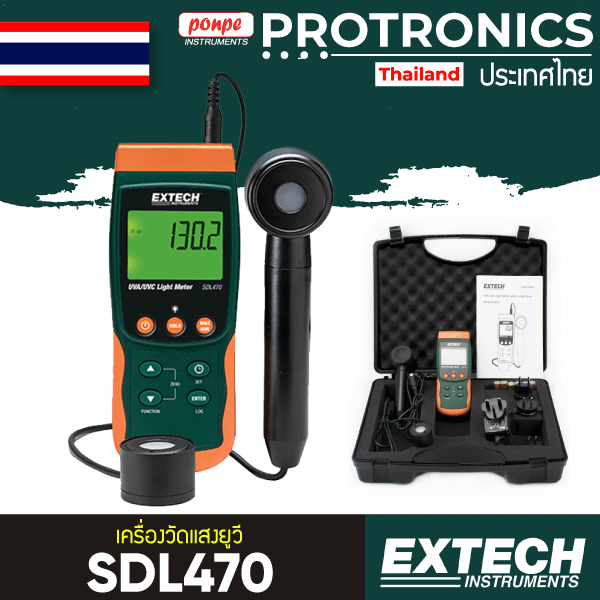